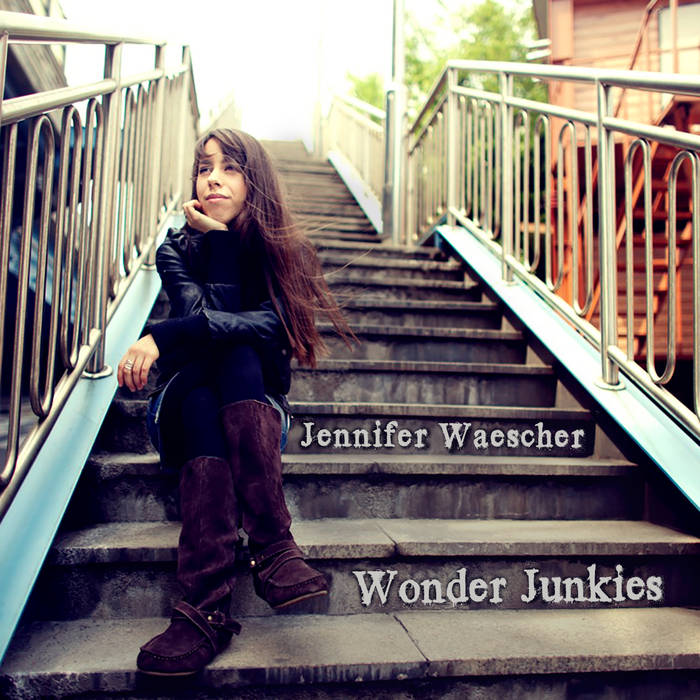 Wonder Junkies is Jennifer's second EP album, and first release in a number of years. This album demonstrates a mix of genres and styles, straying a little bit from her folk/pop style of previous recordings and venturing into some funk and jazz influenced compositions.

As ever, I'm profoundly grateful to my band, the immensely talented musicians that I have the privilege of playing music with both live and in the recordings.

Many, many thanks to Zach Bardon, my first ever band mate, brilliant musician, and good friend, for all his hard work making this set of recordings happen, and without whose skilled and creative contributions, many of my songs would not be the same.

Thank you to Jack Ahn, for having provided, for some time, an amazing music hub in our community and taking the time to record our live sets.

Live Tracks performed at The Alley Bunker and recorded by Jack Ahn, in Seoul, South Korea

Wonder Junkies are:
"the mad ones, the ones who are mad to live, mad to talk, mad to be saved, desirous of everything at the same time, the ones who never yawn or say a commonplace thing, but burn, burn, burn like fabulous yellow roman candles exploding like spiders across the stars."- Jack Kerouac

Jennifer is a Canadian Singer/Songwriter. Her songwriting is influenced by folk, pop, jazz, blues, as well as other world music genres.

Track Name: Summertime
It’s summer time
Mystery and moonlight
It’s a summer night
All sultry and smoky eyed
And you, you’re testing out your new moves
You’re getting ready for your debut

It’s a starry night
Staring at the galaxies
So many stars
So many possibilities
And we are young, we are young
And ready for the world
Misshapen and mistaken
For warriors


It’s summer time
And we’re feeling alright
It’s a summer night
And we’re ready for the sunlight…
Track Name: So Much Fun
So Much Fun

You, you’re good at stuff
And happy
And handsome too
And me, well I’m ready, to love you

Oh, and we’ll have so much fun
Sitting on our porch in our old age

And it’s so much fun
Dancin’ with you
And we’re laughing
All the way
home
Track Name: The Woman
You walk into the room
You look me up and down Trying to discern
Who I am, and what I’m all about
But, you can’t figure me out
Oh you’ve met your match, Mr. Smarty-pants I am the Woman
I am the Woman

So here we go, round and round we go ‘til you get tired
oh, but you don’t get tired, do you?
Oops, did I fake you out?
You though I had expired, only to reappear (How did I do it?)
Hey Mister, I’ve got plenty of tricks up my sleeve
How much longer do you want to play this game with me?

It was easy to make you give me
What I needed
I just had to tell you
I could make you beg, for mercy
But can’t you see
Though I’m using you
You’re not my enemy
No, you’re just like me

Oh how could you tell?
I hid it so well
No one’s ever read my heart
Oh well, I lost so easily
But you’ll always remember me
I am The Woman
Track Name: Come and Go
You can Come and you can go
I’m not fussed I’m in the flow
I’ve got enough of what I need
So please, live your life and let’s be free

I’m full up, I’m happy
I’m everything I want to be
I’m geared up, I’m ready
I’m blazing trails in front of me

But I know things will
Come and go
But I’m not afraid
I’m in the flow
I’ve got no need to hold on
So please, live your life and let’s be free
Oh, let’s be free

You can come and you can go
This love I have is in the flow
I’m not afraid of anything
‘Cause I’d rather be free
Track Name: Sing Anyway
You said you’re not fine today
But you’ll meet anyway
You said, it’s not a good day, not a good day
I’m not okay in my head
I said let’s meet anyway
We’ll take a walk in the park
And draw cartoons in the dirt
And play a game
I think you just need to play a game

Can we play this game again?

Can we play this game again?

Did you notice, we keep being born everyday?
While others die and fade away
Did you notice this whole thing
Has its way?

Gently, wildly, falling into ecstasy
We’re wonder junkies
Can’t get enough
Of that good stuff
I’ll never call your bluff
As we set sail
In Awe….

I gaze up, like so many eyes before me
Like, so many wise before me
Perhaps as you do,
Oceans away,
This moon-phase is over
But you still think of me you say

But tonight is like so many nights
When I’m all alone
But tonight I know your out there
Sharing this mystic moment,
Behold, the magic and the memory
Of the moonlight of the century
And I know that it is all
Coming up for me

Bandcamp Daily  your guide to the world of Bandcamp

Featuring Gary Bartz, 5 years of Rhythm Section Intl and an LP of the week by Nicolas Jaar